Some ramblings of mine. May not have a point. Made because of a spook.

It's New Year's Eve. The end of the final year of the decade. (Unless you subscribe to xxx1-xxy1, then okay.)

All I want to say is... it's been a year. Got this website up and running, even if all I have are empty husks and a low-effort blog thingo

But still! I know one thing for sure! My Danganronpa Let's Play will probably get something done. Almost done with V3, and then I'll go back over everything...

But... That is not what you're here for, viewer? I am truly sorry that I didn't maintain this website...

It's still not as great as I want it to be. But that's okay. It's a personal site. I don't link it to anything that could hint at my private life at all.

Just, all I wanna say is... I'll get this website filled with content that isn't just the basic Neocities stuff one day. There'll be a purpose. And, unexpectedly, it'll start with Danganronpa.

Even drawing something... Fixing a scene whose CG has been bothering me... It's a partial trace of a relevant wall of a screenshot... You'll see. Hint: It's about a bar.

Now, if you excuse me, I have to mourn a fictional character who didn't deserve to die...

It's been a long time since I updated any part of this site, huh?

Well, I found a video on YouTube. It was the first Danganrompa Class Trial, but with Ace Attorney music.

I fell in love.

I do have a written Let's Play up in my writing section, but it is massively incomplete. As in, it is mostly contextless comments.

I bought the first two games on Steam, as well as the Crypt of the Necrodance AMPLIFED DLC. (The bundle it came in is only slightly more expensive than the bundle for the two games alone, and I run on gift cards.) I am still in love.

I actively have to restrict myself to one chapter a day lest I ignore most everything.

However, there is a bath scene. The antagonist manipulates the male characters into perving on the women. I didn't have a choice, as the player character is male.

All I can say is... Seriously??? I am all for some fanservice, but jeez. NO. Respect privacy. If I give a proper review, THERE WILL BE ANOTHER MENTION OF THAT.

Yes, I hate it that much. Even if it had the intended effect of arousal.

Got a Wacom Intuos today. Much better than the mouse I was using... even if GIMP isn't compatible with the pressure sensing by default. Oh well, I got Krita.

Here's some quick sketch I made with it, which is inspired by Dunkey's VRChat segment: 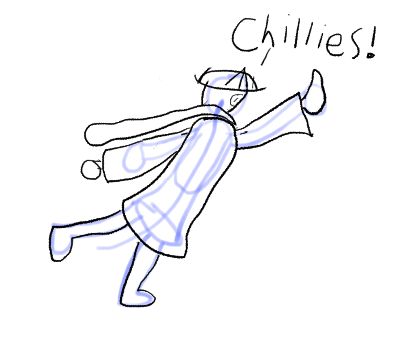 Yep. Niko again. Not all that great.

Also made a landscape in GIMP with the tablet. A faint one. Once I make the art page, this'll be published.